Lanterna is a dramatic, free-standing building that echoes the high-quality industrial architecture on Fish Island in both structure and materials

Shortlisted for a 2019 RIBA Award and 2020 Grand Prix winner in the Evening Standard New Homes Awards, Fish Island Village features Lanterna as its showpiece. Celebrating the creativity of Hackney Wick, Lanterna is a highly contextualised residential block, part of an innovative development from Peabody and Hill. Our design won a competition mandated by the London Legacy Development Corporation to unlock the potential of an important waterside location next to the Queen Elizabeth Olympic Park. The design for a freestanding block comprising 16 apartments and ground floor café-bar-restaurant is laid out in this exemplary Design and Access Statement.

Activated on all four sides, Lanterna’s gritty, urban look locates it firmly on Fish Island – a former industrial district just south of Hackney Wick. Charisma and drama define Lanterna’s striking proportions and active elevations, which are scored all over with a herringbone pattern. The distinctive elevations befit a building inspired equally by Fish Island’s industrial past and its present as home to one of Europe’s biggest creative communities.

Lanterna is the gateway building to Fish Island Village, a scheme designed in a hugely successful collaboration between LGA, Stirling Prize-winner Haworth Tompkins and Pitman Tozer. The six-acre development replaces disused warehouses, opening access to a stretch of canal previously closed to the public, and creating a vibrant cultural and residential quarter in east London.

Vibrant street art dominates Fish Island’s streetscape, wrapping around façades and weaving in and out of reveals. This inspired our creation of a unique elevation treatment that trails a patina across every facet of the building.

Lanterna’s herringbone patterned elevation treatment creates a compelling layer of detail. The pattern continues across the balcony balustrades to generate unity and a bold visual impact.

Lanterna’s elevation materials were chosen to mediate between the historic and emerging context. From Victorian times until the 1960s, Fish Island was a centre of oil and tar processing, printing and consumer goods manufacture. Its buildings were predominantly constructed from concrete and brick, with large recessed openings arranged on a regular grid pattern. Lanterna’s scale, structure and materials honour this legacy.

During the concept design stage, our visits yielded inspiration from the vibrant graffiti that dominates the streetscape. We created a dramatic herringbone-pattern design that wraps around the frame of the building, weaving in and out of reveals. The pattern scales up across the balcony balustrades, creating a visual impact that befits Lanterna’s status as gateway to Fish Island Village and as the backdrop to Lofthouse Square. The herringbone pattern also subtly references the name of the area.

In an innovative move, Fish Island Village’s entire ground-level commercial space will be let to a single organisation, The Trampery, enabling the cross-subsidising and promotion of different uses, including artists’ studios, affordable workspaces, performance space, restaurant, cafés and shops. The Trampery called Lanterna’s ground floor with five-metre ceiling a "breathtaking space", and the building’s patterned precast concrete façade as "unique...gorgeous, a bit like molten lava". RIBA acknowledged the building’s design excellence with a shortlisting in its 2019 Awards

It is difficult to overstate the transformative effect this development is going to have on the physical, social and economic qualities of this part of Fish Island. It will unlock the potential of a strategically important waterside location next to the Queen Elizabeth Olympic Park.

As well as enhancing the physical character of the area, the development will support the numerous artists, designers and creative industry start-ups based in Fish Island. They are frequently accommodated in draughty and inadequate former industrial buildings, but Fish Island Village will offer a diverse selection of new, purpose-built affordable studios and workspaces.

We looked to add value for our clients at every opportunity in the design and build of Lanterna, increasing the effective area of Lanterna’s commercial usage by adding a new sheltered colonnade to the front elevation, and reducing costs by sharing detailing and specifications with Haworth Tompkins and Pitman Tozer to achieve a commonality of components. 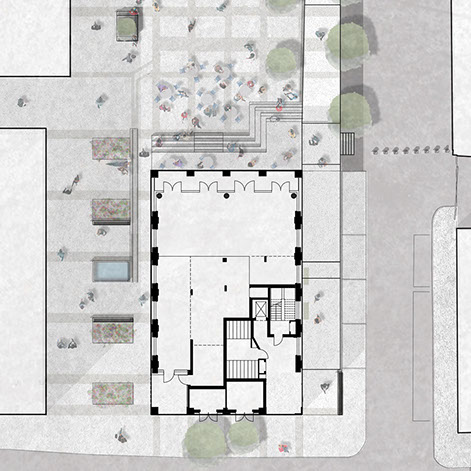 The café-bar-restaurant spilling out into the new public square

Entrance set back to allow direct link to ramp

Mezzanine-level restaurant space looks out over the bridge

Thoroughly knitted into its surroundings, Lanterna takes care to exploit its position on the edge of a waterside public square. A colonnade steps the building back at ground floor level to create a permeable private-public space into which the restaurant and café can spill. Amphitheatre-style steps exploit a fall in ground level between Lanterna and the canal, creating a meeting place that nurtures a sense of community.

Our building anticipates a planned footbridge across the canal to the Queen Elizabeth Olympic Park. Lanterna’s design integrates the ramp of the new bridge into its base, borrowing space to form a welcoming and generous reception to the building. The intervention also ensures level access, and helps funnel people from the bridge into the café. 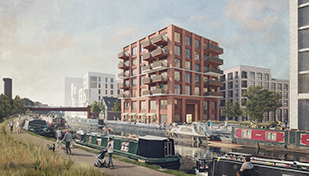 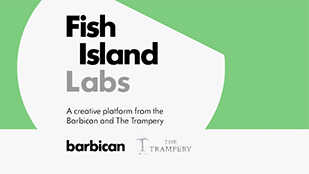 Inside the rise of Fish Island Village

Matchbox cars, the world’s first plastic and the word ‘petrol’ were all born in Hackney Wick. We take a look at the manufacturing past of the Wick’s southernmost reach, Fish Island..