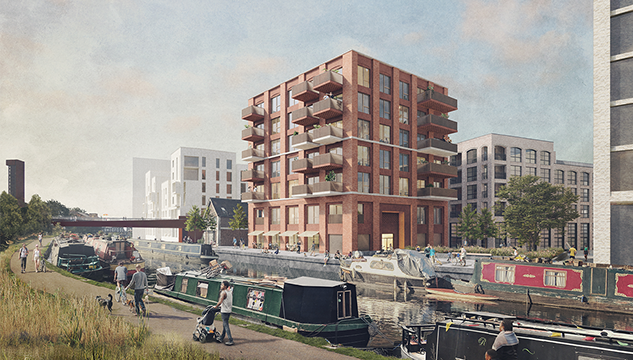 LGA is designing a mixed-use scheme on a riverside site at the heart of Hackney Wick. The prominently situated building will be the backdrop to a new public square and a gateway to the wider development, part of the London Legacy Development Corporation’s (LLDC) regenerative Masterplan for the area surrounding Hackney Wick Station. The Hackney Wick Fish Island Retrospective Masterplan won the 2019 Planning Award for Placemaking at High Densities.

The site at 119 Wallis Road is directly opposite the Queen Elizabeth Olympic Park, connected by a new pedestrian bridge over the River Lee. The plot is currently occupied by modern warehousing of no heritage or architectural merit, although it neighbours a rowing club boathouse. This historic 1934 building influenced the design proposal, which it places at the centre of landscaped public realm. Our proposal is for a seven-storey building with ground-floor retail and a restaurant-café that will spill out onto the new public square. Brick-and-concrete elevations will help the building sit comfortably in the Hackney Wick Conservation Area, characterised by industrial architecture. 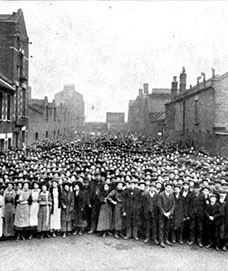 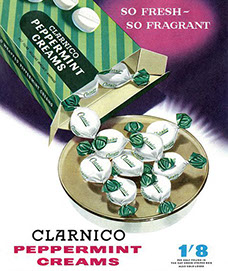 Once virtually uninhabited marshland, in the 18th Century industrialists began the transformation of Hackney Wick into a place of oil and tar processing. By the turn of the 20th Century, Hackney Wick was densely populated with factories turning out consumer goods for London’s thriving retail sector.

Historical maps show how Wallis Road and the surrounding area came to be dominated by the Clarnico Works Confectionery Factory. Arriving at Wallis Road in 1870, Clarnico rapidly expanded across Hackney Wick, eventually gaining its own fire brigade and ambulance. The biggest sweet manufacturer in the country was most famous for its Mint Creams, which are still made today by Bassett’s. 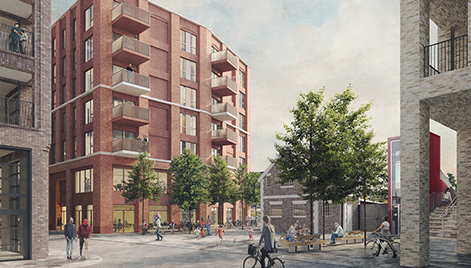 The LLDC granted outline planning permission for the Hackney Wick masterplan in April 2017. The masterplan identifies the area around Hackney Wick Station as a new “thriving town centre... supporting existing communities and a new development of up to 850 new homes”, along with low-cost and affordable workspace for artists, creative and tech businesses, retail, restaurants, bars and community facilities. New routes and public spaces will improve the area’s connectivity and legibility.

The intention is to enhance the Hackney Wick Conservation Area by promoting high-quality schemes that build on the location’s character, supporting residential, cultural, creative and business communities, and improving the setting for the heritage buildings. Several existing buildings were identified as heritage assets that should be retained as part of the development. This includes the Eton Mission Rowing Club Boathouse and 88 Wallis Road, an early-20th century factory identified in the Hackney Wick Conservation Area Appraisal as a “building of townscape merit”. 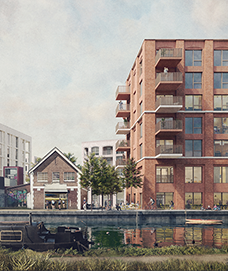 The plots defined in the masterplan did not reflect ownership boundaries, which meant that bringing the two developers together was fundamental to the project’s delivery. As in LGA’s work at Fish Island with Haworth Tompkins and Pitman Tozer, using a European model of collaboration helped the client to negotiate the site parameters, while working closely with neighbouring architect [Pollard Thomas Edwards] led to a coherent design able to satisfy the masterplan’s ambitious targets.

The design takes its cues from the area’s industrial heritage: like the historical industrial architecture in Hackney Wick, the proposed building features large openings set within the principal grid. Visual interest is generated by varying the reveals to create changing patterns of light and shade throughout the day.

Inspired by historic industrial buildings such as Lion Works on Wallis Road, the block features spandrels and arched lintels. The spandrels will be formed from red, through-colour, pre-cast concrete panels that are acid-etched for a tactile finish. The same through-colour concrete forms the balconies, whose soffits will be embossed with a pattern inspired by Clarnico’s Mint Creams. 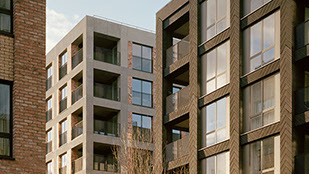 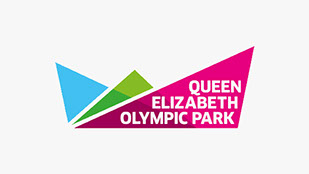 The history of Clarnico
BD on Wallis Road

Matchbox cars, the world’s first plastic and the word ‘petrol’ were all born in Hackney Wick. We take a look at the manufacturing past of the Wick’s southernmost reach, Fish Island..